ALIENS WAS HERE IS A VEECO PRODUCTION STARRING THE ELITE VOLCOM SURF TEAM. WE SETTLED IN BALI FOR FIVE WEEKS AND THE BOYS ENCOUNTERED MORE THAN JUST ALIENS!

This is a true story based around the Volcom surf team’s exploration to Indonesia. We rented a house in Bali, Indonesia and invited every team rider from all over the globe. The plan? Well, there was no plan. We settled in a luxurious villa in Canngu for five weeks and the boys encountered more than they bargained for. From our top lords scoring a secret slab to our alienated youth shifting heads, this film will leave you with a fine dosage of yet another Volcom classic!

A HAZY RECOLLECTION OF STRANGE ENCOUNTERS DOCUMENTED BY RICHIE OLIVARES:

Ozzie was on a painting craze in Bali. He was tagging “Aliens Was Here” all over town. He even painted his face for each surf and I think it scared everyone off in the line up, which resulted in heaps of waves!

“Believe it or not, but this car was a rental! I think it gave us good luck and it became a wave magnet. We had to pay for the car to be repainted when we gave it back, but it was totally worth it. Many would say that it upped the value of the car.” 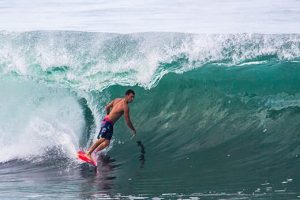