Held at the Volcom Garden in Austin, Texas, these longtime friends will mark the premiere of their first collaboration, with Jess Rotter bringing to life selects from Johnathan Rice’s recent book of poetry in her distinctly whimsical graphic style.

An author and longtime singer-songwriter and musician signed to Reprise Records, Rice has worked as an actor and contributed to the soundtracks of several films and television shows and a producer on an upcoming feature film. 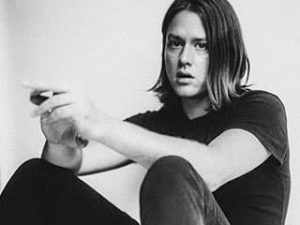 In 2016, a shift in Rice’s life led to hours spent on Instagram, igniting a personal creative experiment as he began populating his feed with words, all on an app usually reserved for images. The resulting series of what he dubbed his “dystopian haikus,” eventually became a publication, Farewell, My Dudes.

A curated selection of Rice’s Instagram posts, each of them a 3 line, structured syllabic wonder, the book is sly, witty and unexpectedly poignant. Rice’s dystopia is simultaneously insightful and hilarious, an assortment of keenly observed statements about life, music, art, social media, brunch and of course, love.

Informed by a deep knowledge and love for the world of 1970’s rock ’n’ roll, Jess Rotter was first inspired by her father’s vinyl covers and comic books growing up. She describes her early aesthetic influences as, “part Peter Max, part Fritz the Cat.”

Her art and illustrations have appeared on public murals to album covers and Rotter has collaborated artistically with everyone from Parker Posey (for her recent memoir “You’re On An Airplane”) to Jack White’s Third Man Records, as well as creating official band merchandise for acts such as the Grateful Dead, Yusuf/Cat Stevens, Sly Stone, Rodriguez, Big Star, Mavis Staples, Kurt Vile, and more. Rotter’s own recent book, I’m Bored, is part art book, part comic book compilation. Designed by the artist and with a foreword/toast by Kate and Laura Mulleavy of Rodarte, I’m Bored is a Gary-Larson-meets-The Muppets variety show, a terrific trip composed of recurring illustrated characters ranging from walruses to wizards to life warriors who are all, like the rest of us, seeking their daily salvation.

The event will feature the work of both multi-talents with Rice and Rotter original music, books, and art available for purchase.