Volcom Artist Gemma O’Brien is a master of hand lettering, typography and large-scale murals. Since being an artist for Volcom, she has created two incredible one-of-a-kind murals. The first one on her home turf in Sydney where she painted a huge True To This piece, and secondly in California at Volcom Headquarters’ creative space: The Art Loft.

Having been on a Europe tour for the last few weeks speaking at design conferences and festivals, Gemma finished up her trip in Barcelona where she painted a large mural in the Volcom Store. We thought we would follow her around and see her process from concept to finished product.

As it turns out, a sim card and Google Maps panned out to be a girl’s best friend while trawling the streets of Barcelona for art supplies! Gemma found a great store that had everything she needed, so a quick trip there for acrylic black paint, mixing medium, paint pens, pencils, and a fist-full of varied-sized brushes has the mural kit all sorted out. 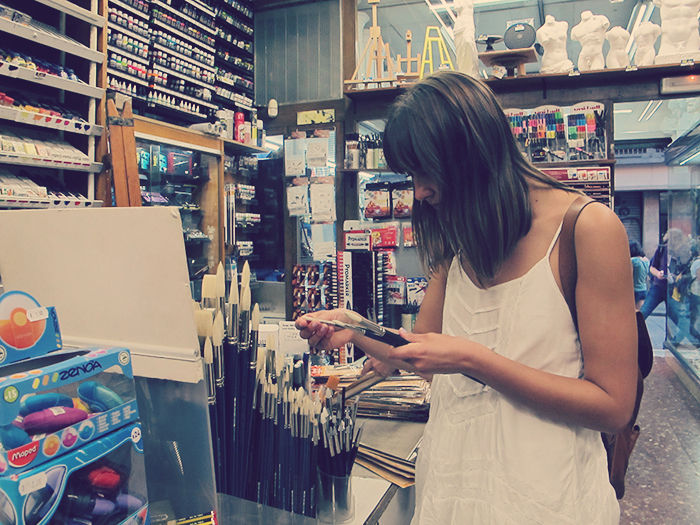 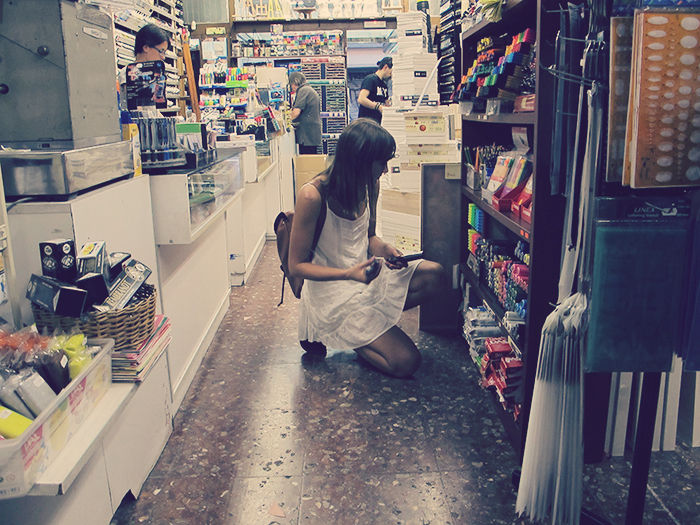 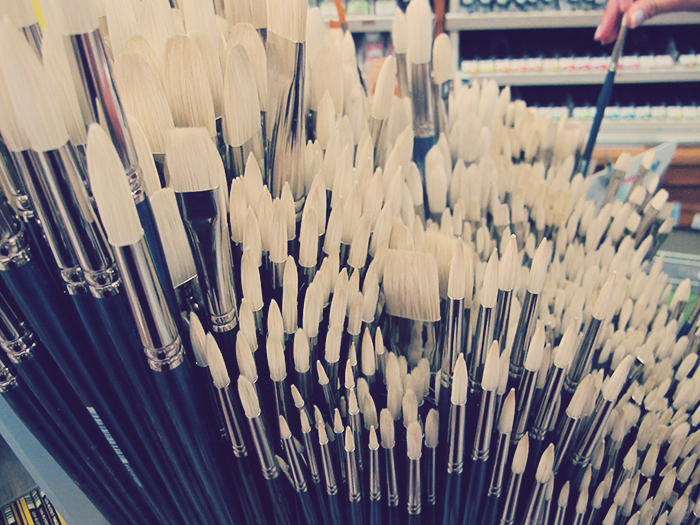 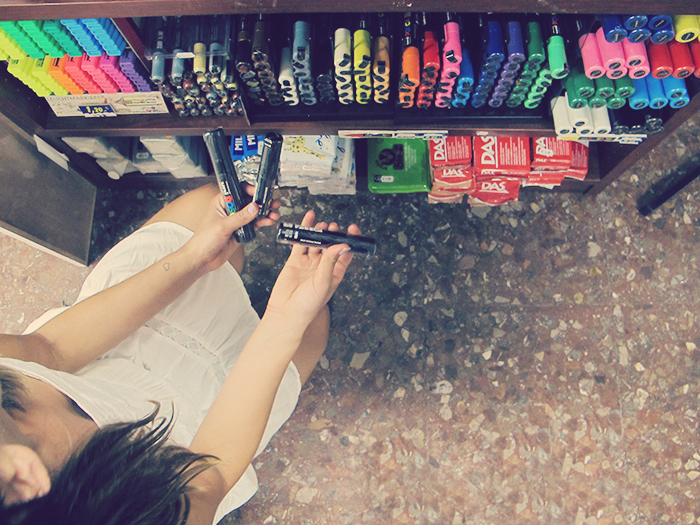 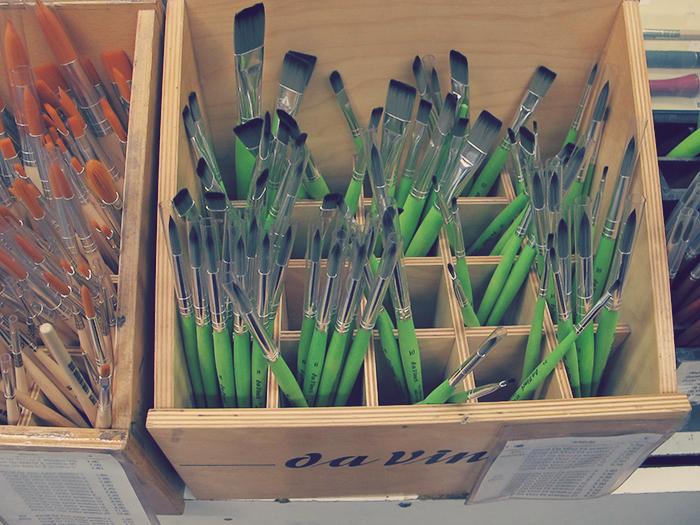 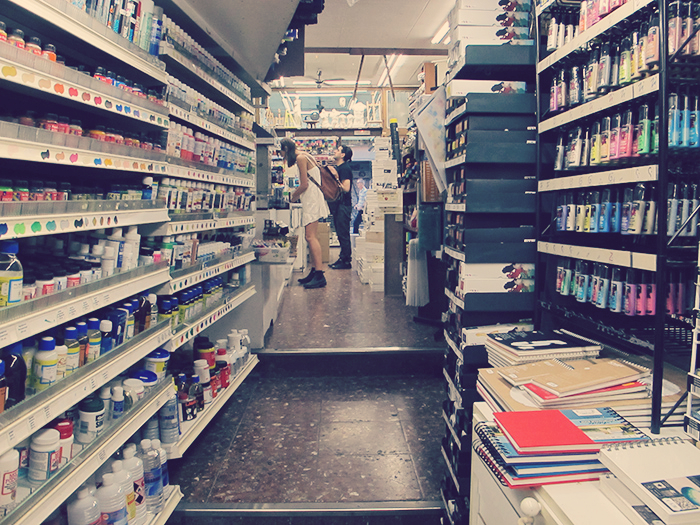 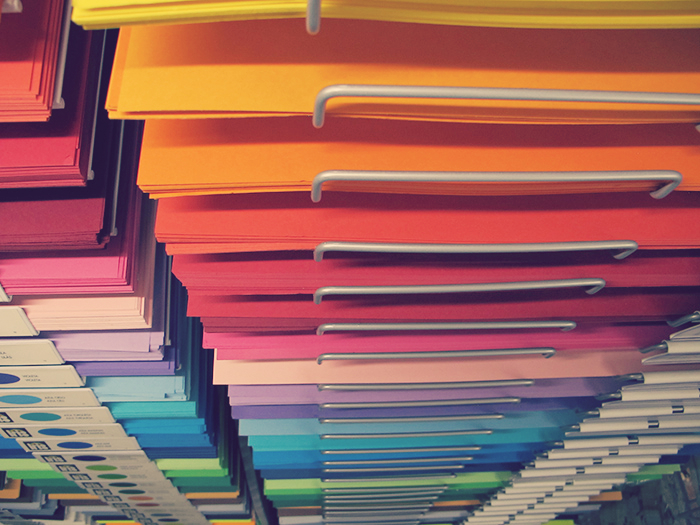 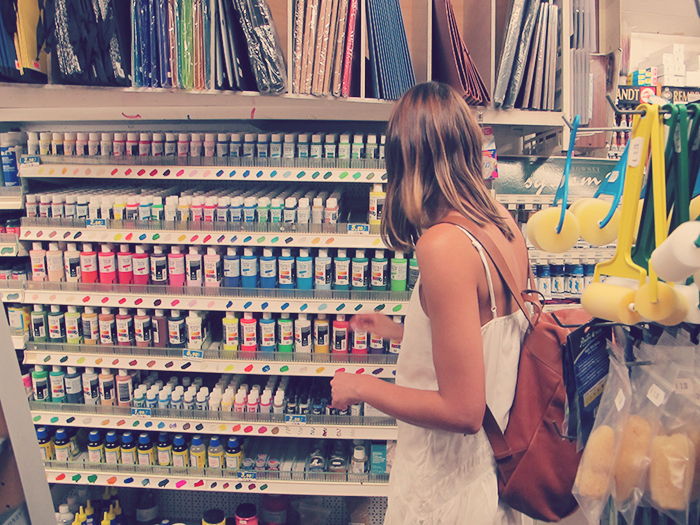 After Gemma got all her equipment, she headed to the Volcom store to check out the wall space, measure it up and work out the dimensions. After several photos and ideas running through the artist’s mind, she headed back to her studio to start on some preliminary sketches and concepts that suited the space.

The absolute mobility of Gemma and her work is an impressive feat. The makeshift hotel studio she had set up was comparable to a young college girl’s dorm room to say the least. The creative concept being developed on a tiny hotel desk, hunched over and cramped, to then be executed on a 23-foot-wide wall completely stretched out comes full circle from concept to reality. That’s an artist. That is Gemma O’Brien.

Gemma spent the night roughly mind-mapping her piece. Lots of thumbnails and sketches with a quick tapas break around 11pm. Artists don’t sleep, and well, it’s Spain! Home of near-midnight dining – a welcomed schedule for Gemma who usually prefers to work through the night.

With her final piece in mind and creative confidence stirring, Gemma hit the Volcom Store in Barcelona around 7pm to get started. Like any artist, ideas are constantly flowing and getting a piece finalized has many different considerations as the artwork metamorphosis a few times throughout the process with a new idea that pops up, the countdown clock rearing its head, and other variables come into play. But Gemma is no stranger at this game and surely doesn’t bite off more than she can chew as the mural was painted live at the event.

The artwork was drawn in layered stages, scanned into Photoshop, arranged and un-arranged, reprinted, redrawn – you name it. This is the most consuming part of the process for some. The design needs to be perfect and Gemma likes to push the idea until she is completely happy it suits the space, the brief, the vibe of the event, and challenges her as well as keeping the art fresh to the audience. She made it look easy, but it was a laborious day in a squishy hotel room at a tiny desk drinking weird coffee which accompanied the process. It must be noted, the lady worked hard as hell the entire time.

Arriving at the Volcom Barcelona store, the wall looked large and daunting after working on the small-scale version. The helpful staff moved all of the clothes off the racks and Gemma got to work scaling the artwork with her projector. This bit was fiddly. The wall was an uneven space with racking and shelves which needed to be attended to. A major concern, especially to those of us who are rattled with perfection, was that the artwork needed to look centred on the wall. After some questioning and measurements, the projection was in place and Gemma went about marking reference points. A few areas needed to be completely free-styled as there were poles and other objects in the way which obscured the projection. “All in good fun,” said Gemma with a smile.

The mural needed to be almost finished by the time guests were due to arrive at 7pm for the night’s event, while the remainder was to be painted live in front of the party before the band played. After weighing in on timing, Gemma decided to paint all of the highest points of the artwork as balancing on a ladder in a crowd of party people would be stressful to say the least! She also went over any parts that were not completely opaque or have dried a bit shakey. Perfecting her work as she went.

The party got cranking around 8pm. Mini burgers were scoffed, beers steadily swilled, and eyes were glued to Gemma’s final moments of painting. It’s really the coolest thing to see a piece of artwork like this finished live in front of a party crew.

A legendary night indeed! The who’s-who of Barcelona’s cool set, industry folks and media zombies alike all enjoyed a night of live painting and live music. All helping to celebrate a truly Volcom moment in Barcelona. True To This, always.

Thank you to Gemma O’Brien for staying true to the Stone and cranking out such an epic piece, and Lamono Magazine for hosting our event. Until next time! 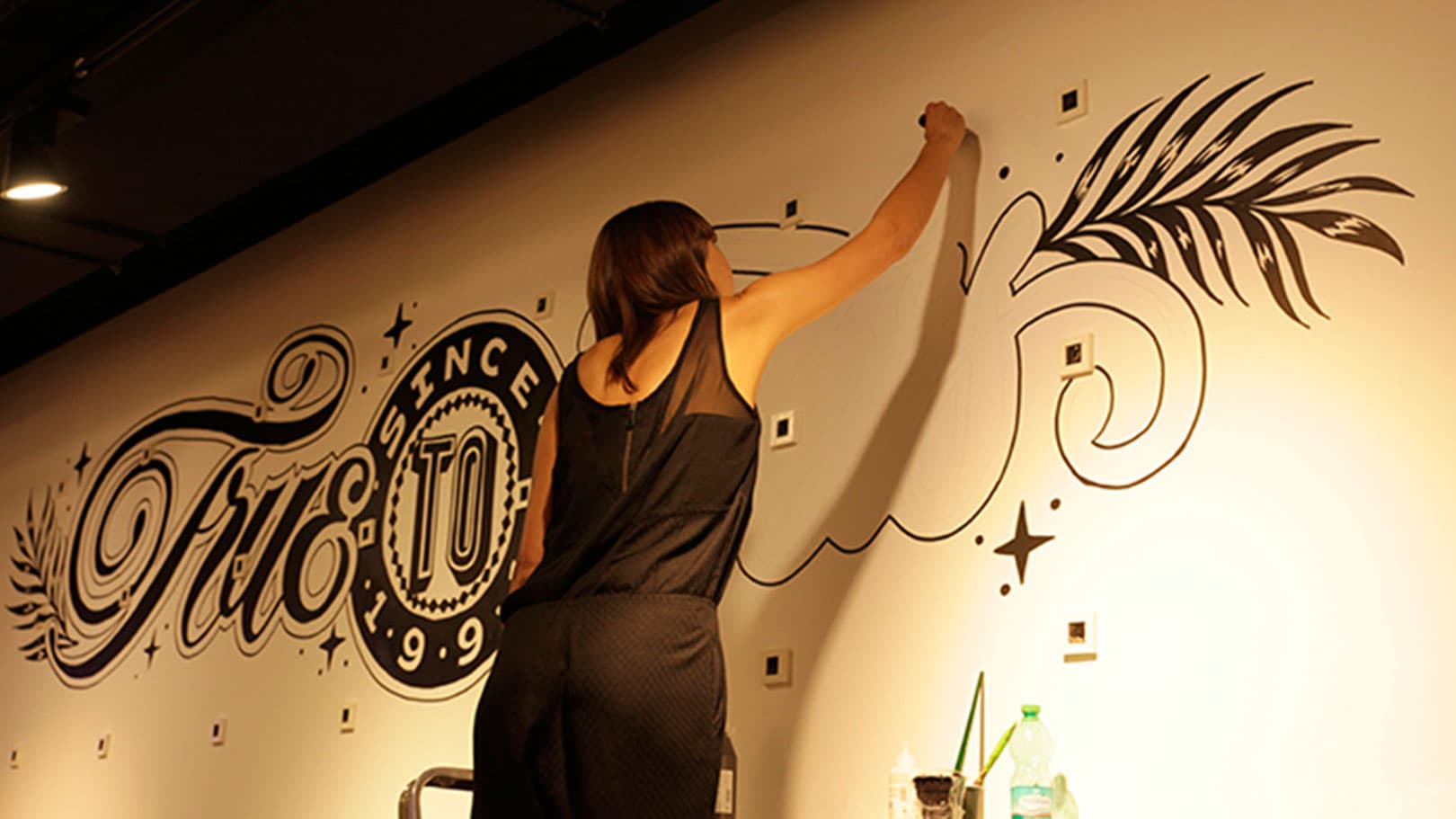 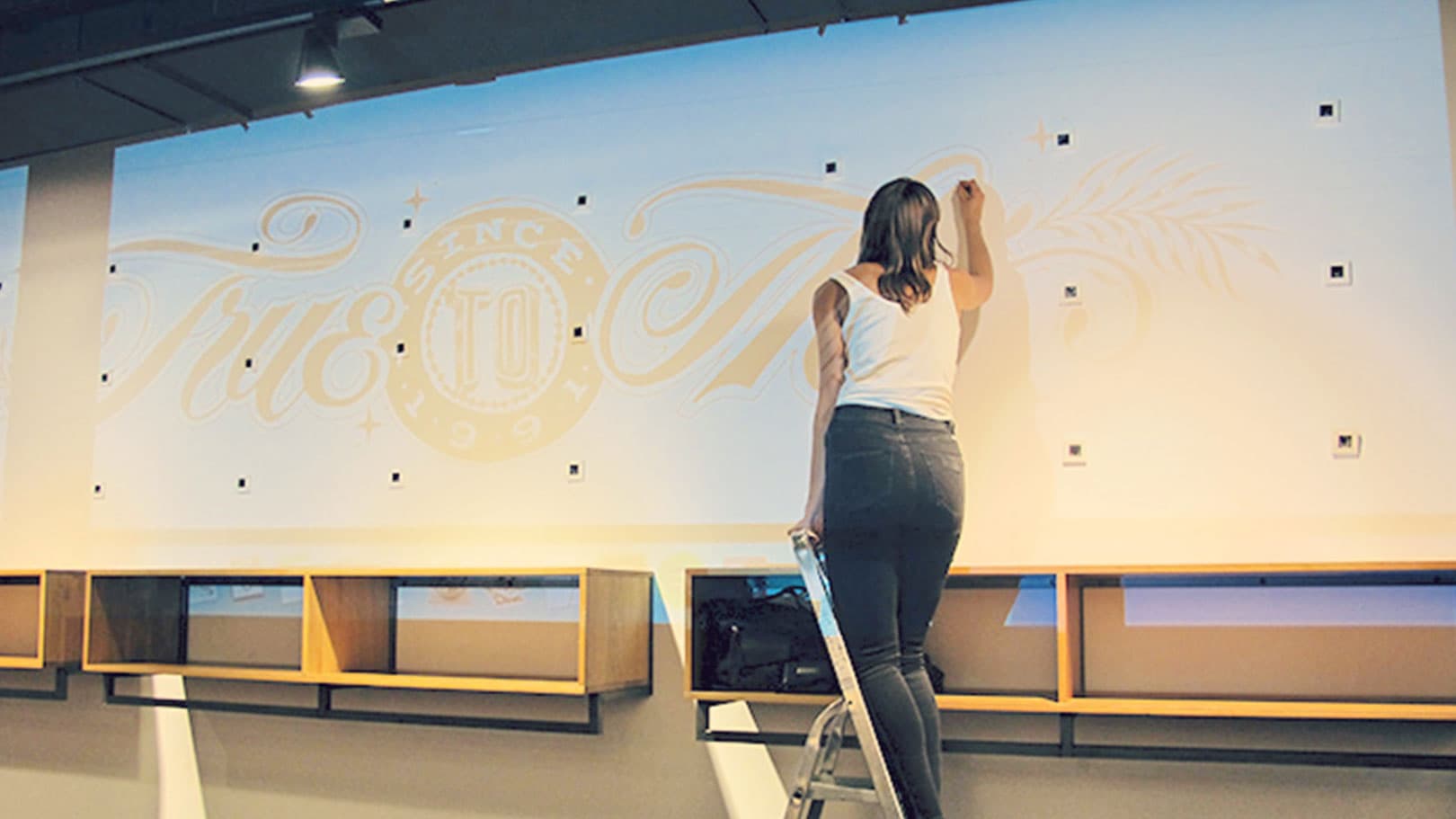 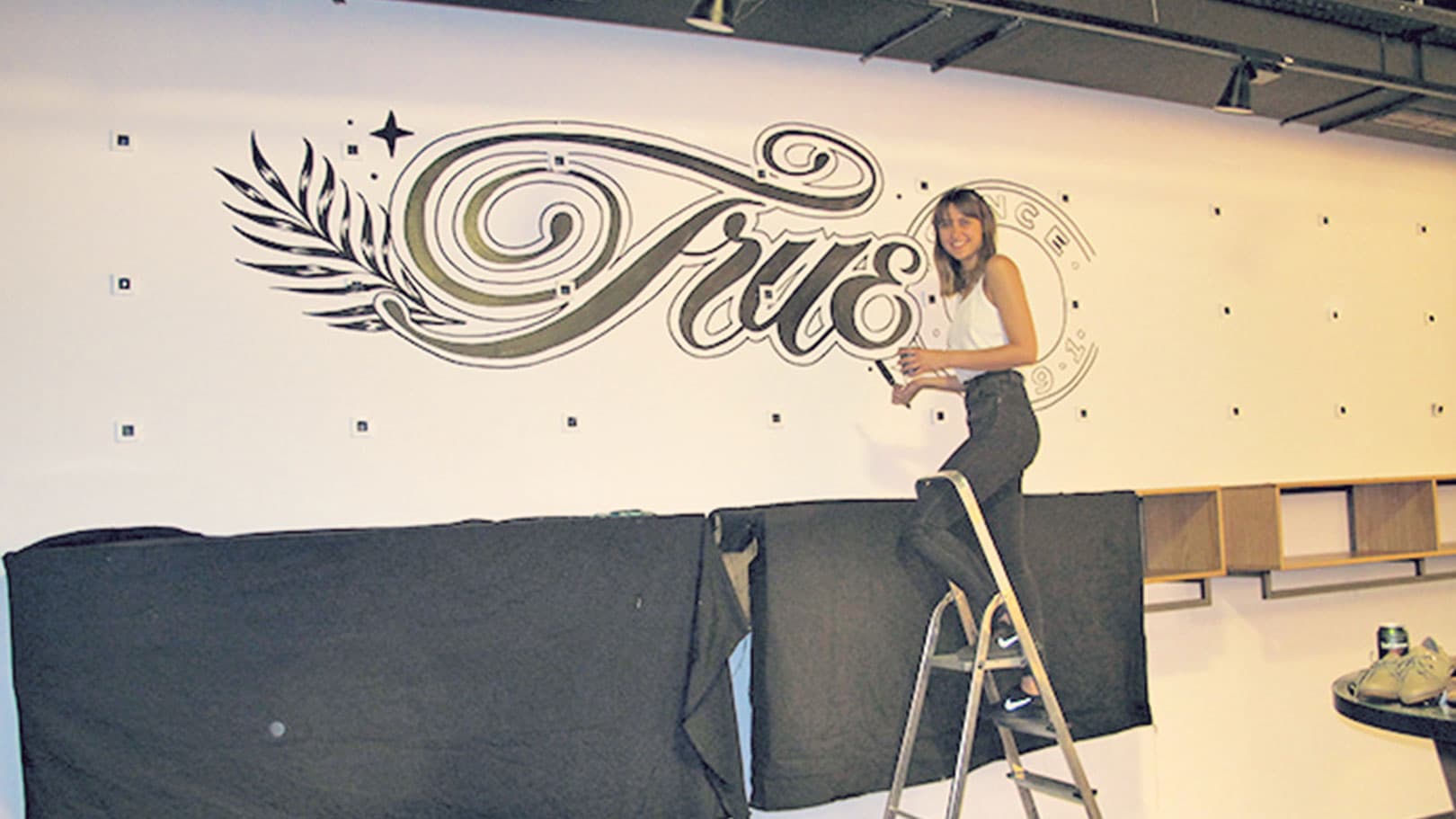 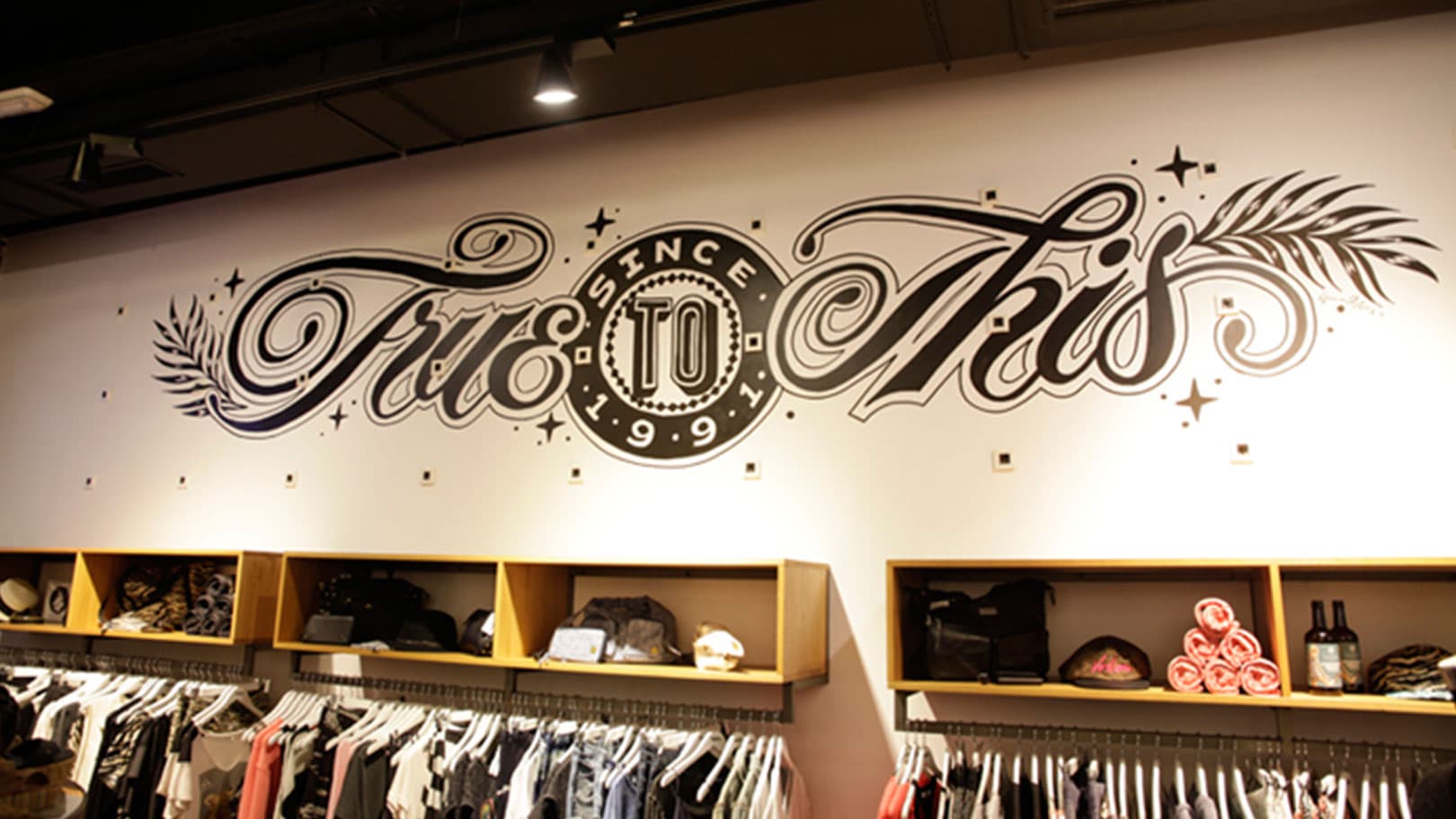 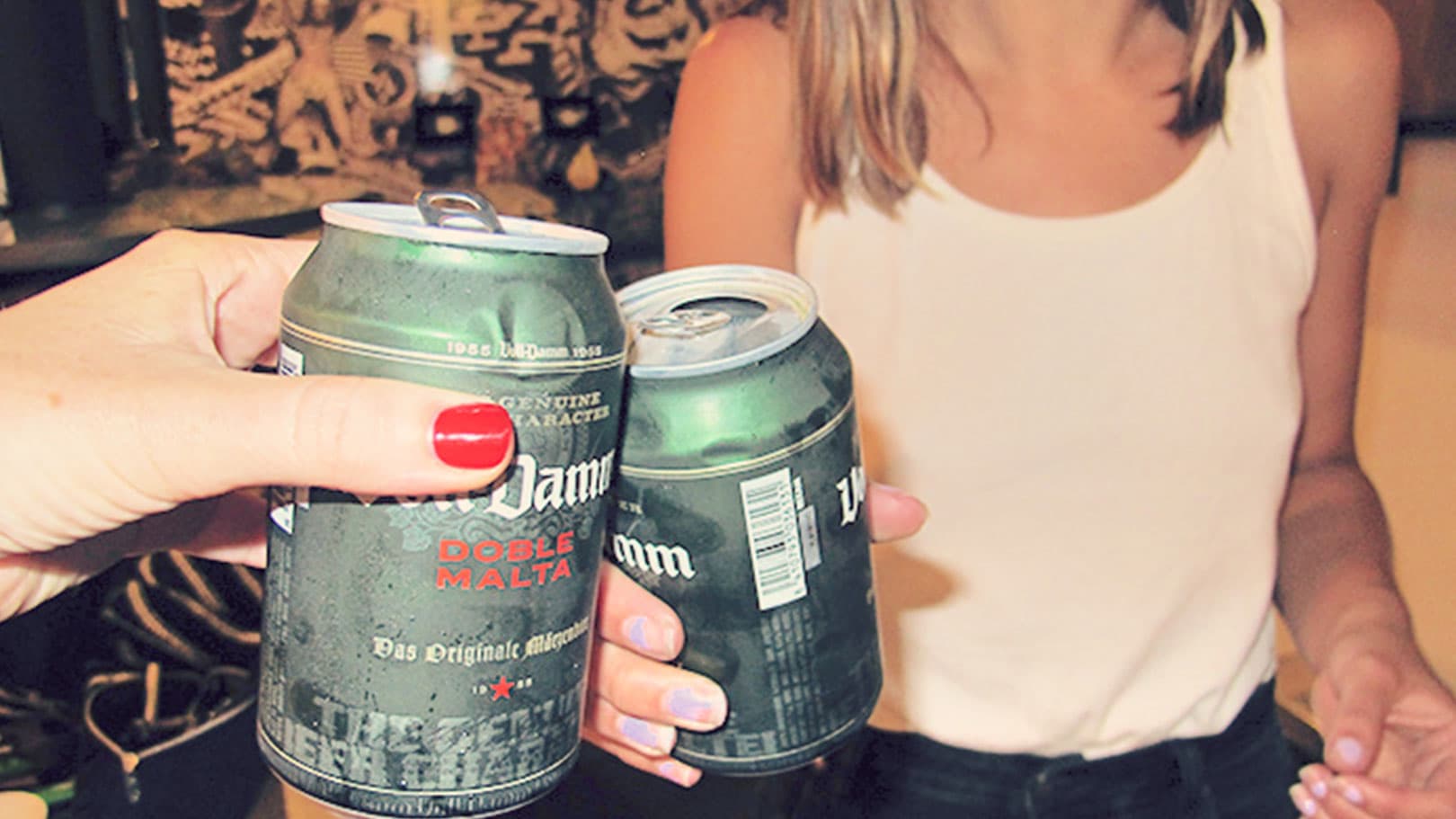 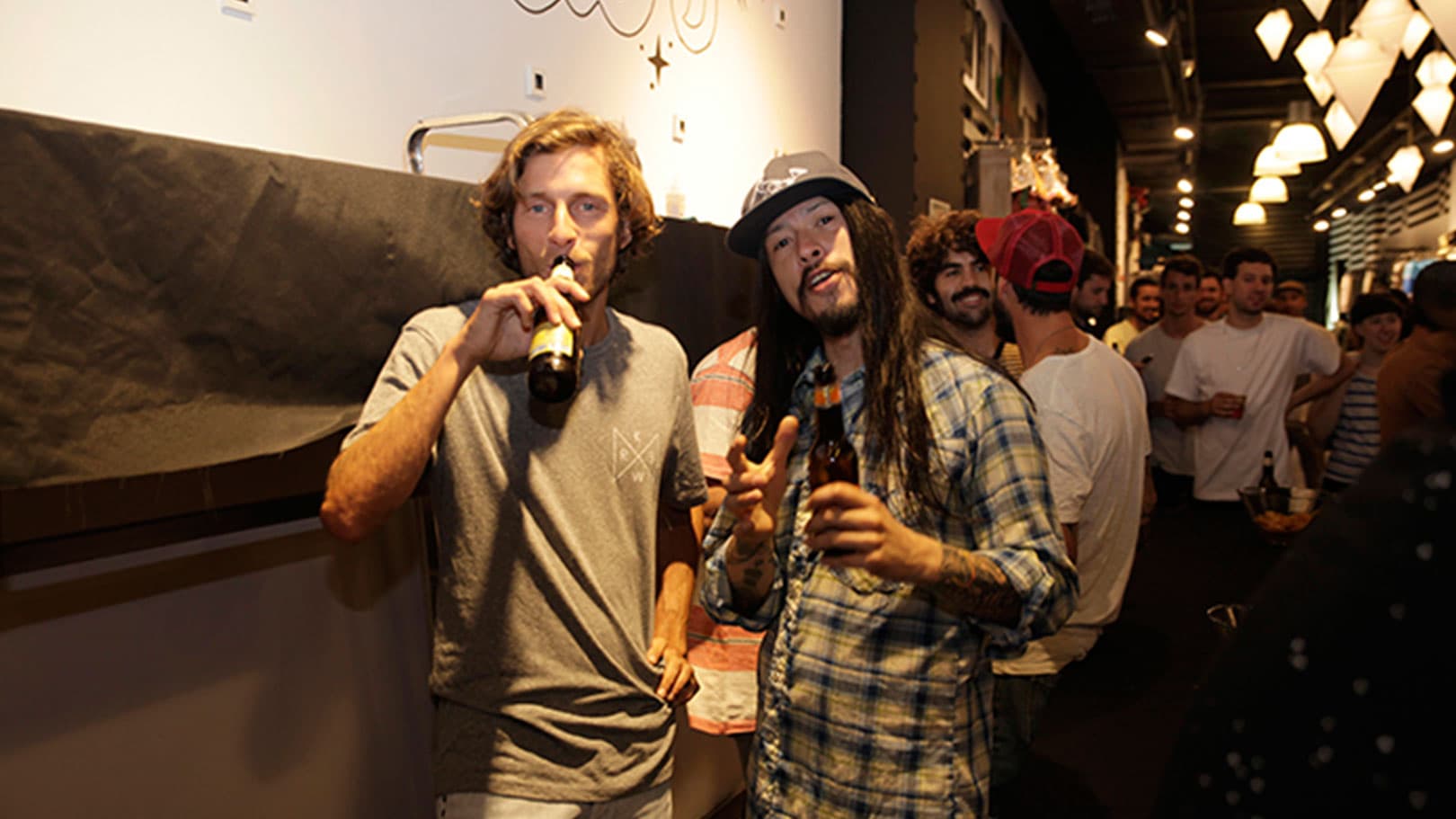 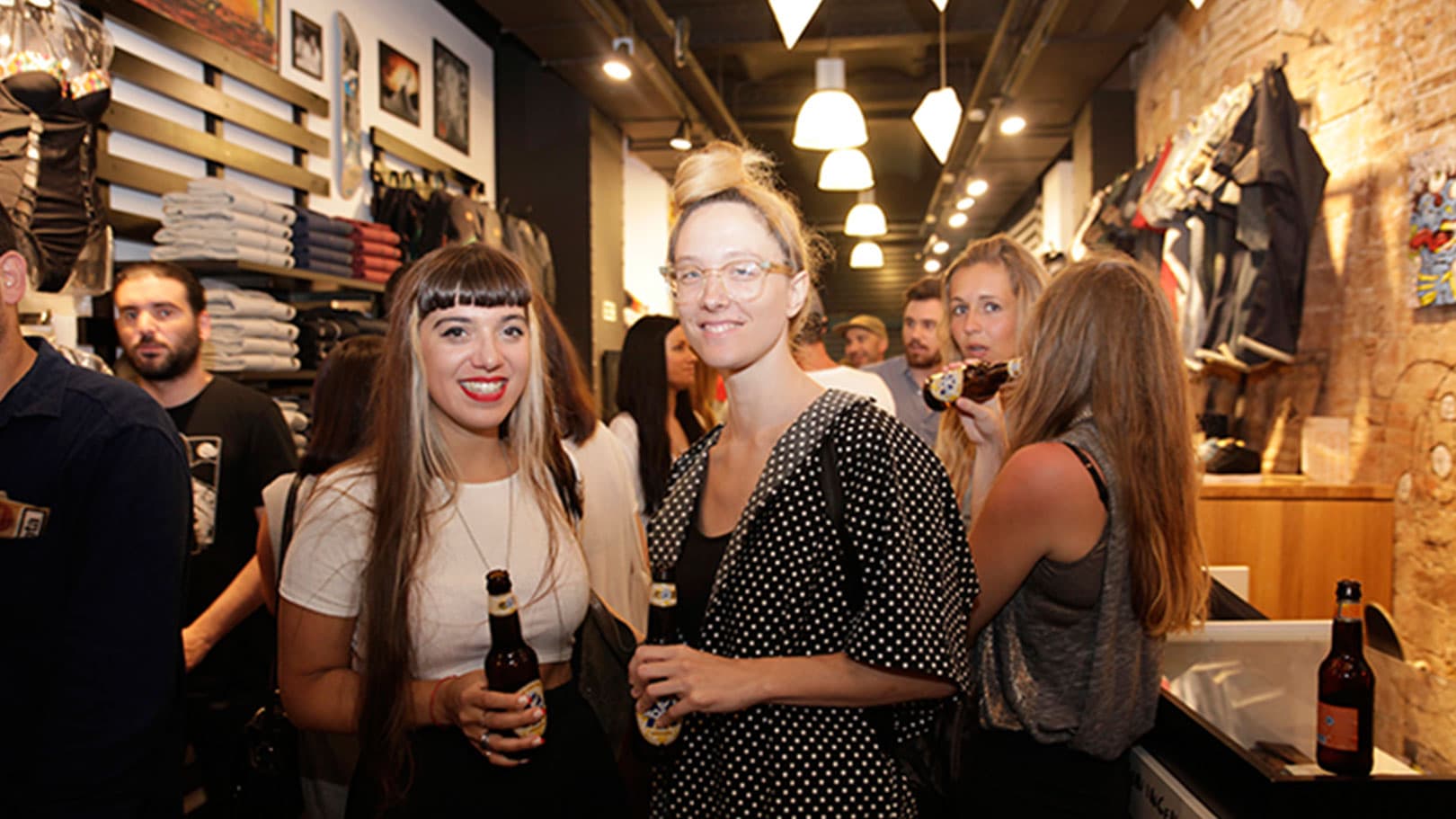 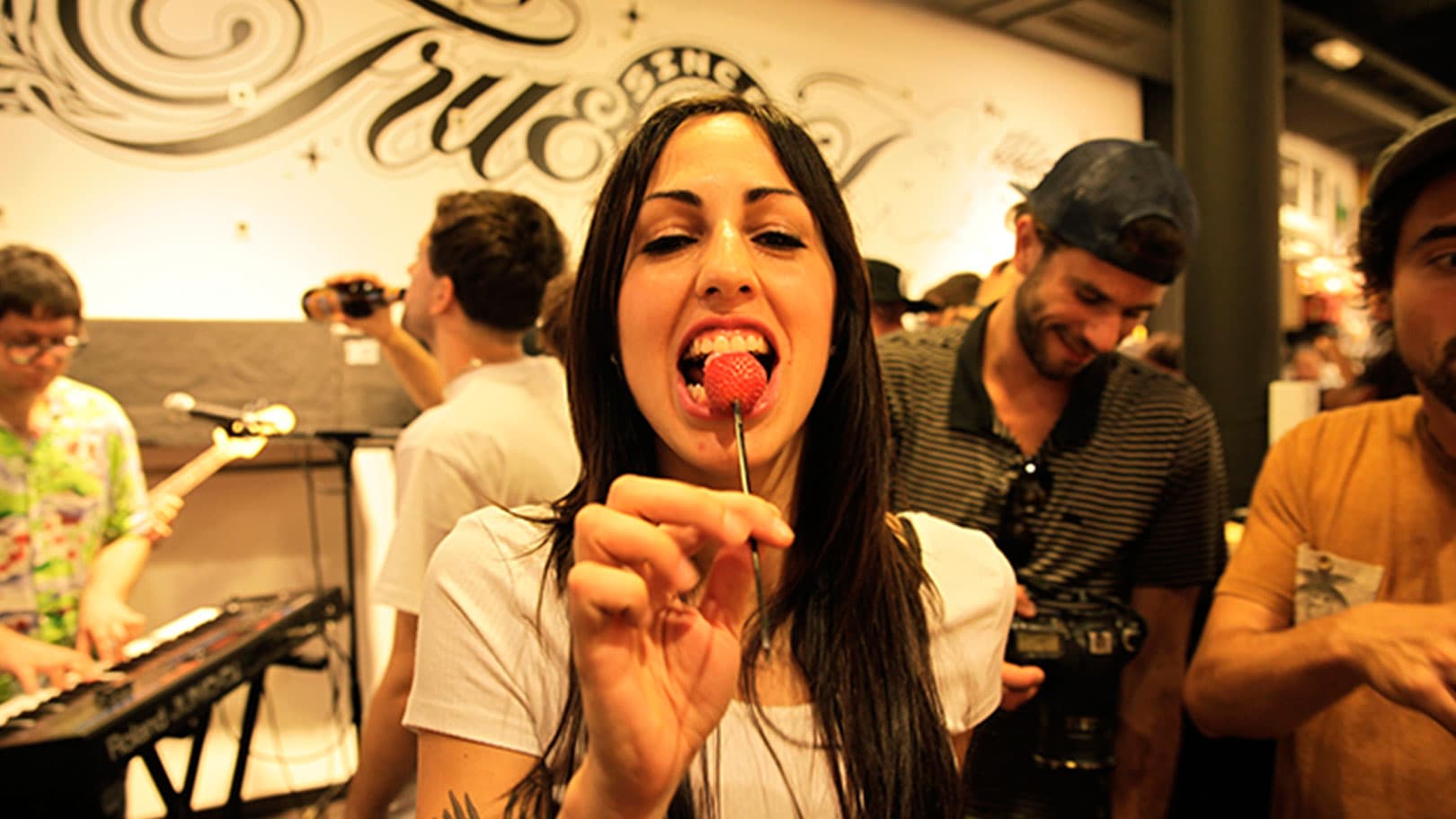 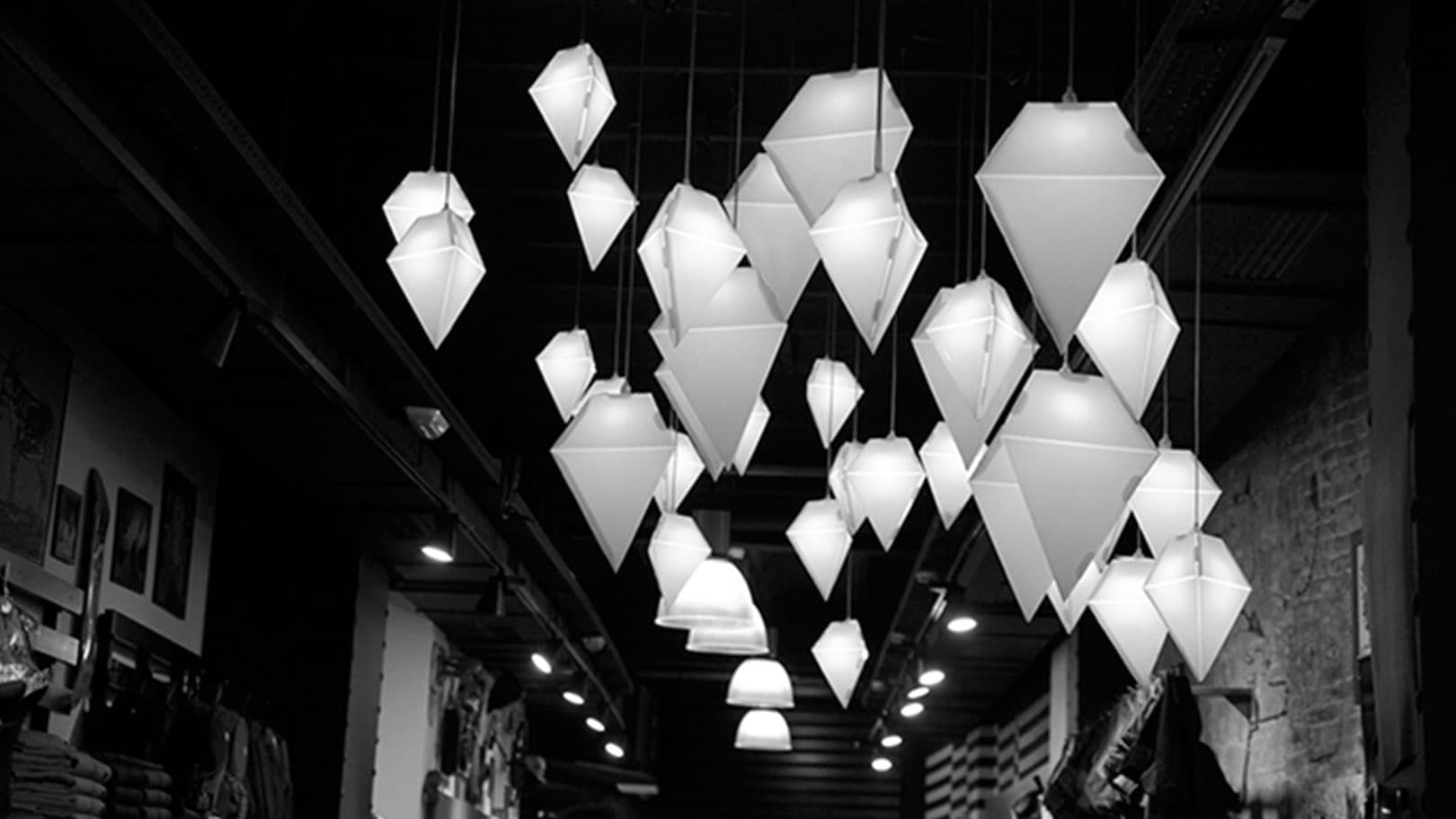 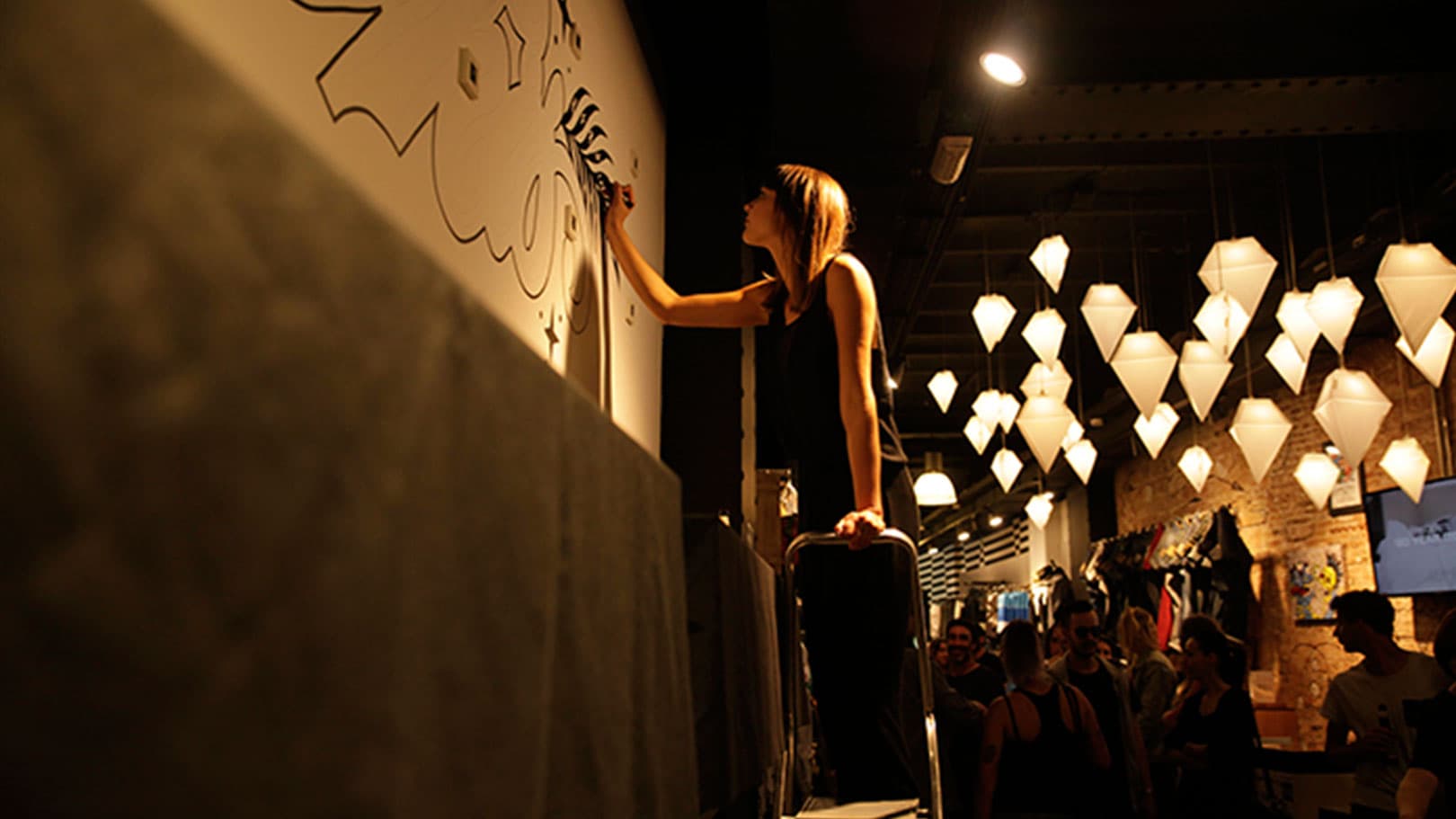