The story behind the 1986 Toyota 4-Runner build

California’s high desert is where CJ Collins has been growing up and since he was 10 years old, both he and his dad have kept me up to speed by sharing footage of him skating obscure locations such as full pipes, empty pools, diy spots and ditches, often, out in the desert, off the beaten path via a dirt road. CJ thrives in these obscure locations and is where the inspiration of this campaign inseminated. At the same time we were brainstorming the campaign for CJ’s forthcoming Liberation Cont’d capsule, I had personally picked up a clean old 4runner out of Phoenix AZ. Completely unrelated, but as the timing would have it, the idea to use the transformation of this bone stock truck into an off-road-spot-check machine for the campaign presented itself naturally. 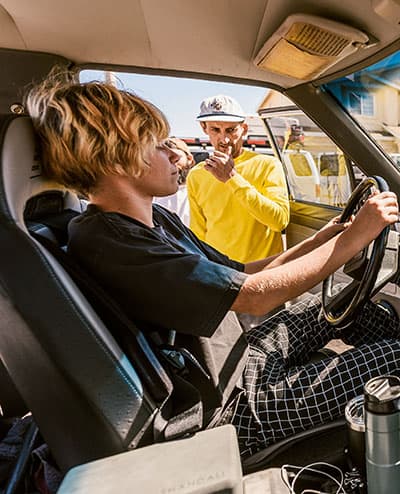 Following the initial idea to incorporate the 4runner into the campaign came the idea of reaching out to off-road industry to see if anyone would be interested in joining up with our mission by outfitting the truck with product to improve its capability in the dirt. Initially I was a little apprehensive reaching out but we soon realized that off-roading is similar to skating in that we’re all out exploring new terrain looking for new spots and experiences.
My first call was to Total Chaos who makes a mean long travel suspension kit and are located not far from Volcom out in Corona, California. After a few attempts I was finally able to speak with Nicole who greeted the project with complete enthusiasm and stoke. This connection was key for the rest of the project. Nicole referred me to a couple more brands like Deaver Spring and King Shocks to round out the suspension, who then referred us to Toyo tires and KMC wheels who are all here in Orange County and familiar with Volcom.

Now that the build was real, I reached out to my friend Carl at Nitro Gear to talk differential gearing and he jumped on board with front and rear 4:88 gear sets to accommodate the bigger tire size. The supporting brands grew, the referrals continued introducing me to Rigid Industries lights, Rockford Fosgate stereos and Warn winches. With a few more cold calls, one to Trail Gear for bumpers, armor, axles and major brake upgrades (huge thanks), and a couple more to PRP seats and Advance Fiberglass fenders, I was getting close. Finally, my last call was to LC Engineering out of Lake Havasu Arizona who worked out a great deal on building up the motor, these guys specialize in livening up the famous 22r series Toyota motors as well as other Toyota motors. The new LCE motor enables the truck now with all the combined weight of the newly added gear to get down the road swiftly.

For a custom interior touch, I even reached to another friend of mine Jeff at Skatelite who makes sheets of composite hardboard one would see on the big skate vert and mega ramps. Jeff hooked me up with custom black panels. Meanwhile, as Cody the fabricator working on the truck did his work elsewhere I used our woodshop here at Volcom HQ to build the panels and install the speakers into them. Being that these sheets withstand weather and are tough as nails, I knew this material would be perfect structurally for housing the heavy duty marine grade Rockford Fosgate speakers while simultaneously standing up to any weather an open top off road vehicle might encounter.

Without the overwhelming support from all those involved in the build, we would have never been able to get the truck dialed just in time for us to get out and film CJ and the team skate on the dates we had on calendar before any winter weather could muddy up our chances of getting good footage. We put a few thousand miles on the truck during the filming process, broke it in proper, re-welded a couple sections and now know what she’s capable of. For the next adventure, be it waves, snow, more skate terrain, or the vast great wild, bring it on! The untold tales will be shared here in time, for now we hope you all enjoy CJ’s liberation continued story as much as we did creating it.

HUGE thanks to all the brands, your willingness to get involved in this experience means a great deal to me and Volcom!