In the second week of July, I joined Tre Packard, PangeaSeed Foundation Founder and Director, on their sixth annual expedition to Isla Mujeres, Mexico, in the Caribbean Sea, to document the largest aggregation of whale sharks in the world. In my ten years of diving, I’ve never seen anything quite like this. Every year, hundreds of whale sharks gather north of the island and tourists from around the world flock to see them. We headed down to document and experience this surreal gathering of giants.

Our group was led by Tre and Akira Biondo from PangeaSeed Foundation, a non-profit organization that creates environmental awareness and change through art, education, and science. Joining us were five other people from around North America who wanted to experience the sharks just like I did.

GETTING CLOSE WITH WHALE SHARKS

Searching for whale sharks is not easy work. Unlike true whales that will blow and breach, whale sharks simply break the surface of the water with their dorsal fins that max out at maybe two feet high. Spotting a fin in open ocean from a speedboat is almost purely luck unless you’re an experienced guide. Even with a guide, and nine other pairs of eyes peeled, we didn’t find the sharks for two hours, and when we finally did, the crowds had already arrived. But the transition from no sharks to sharks was immediate. So Tre and I got all our gear ready, threw on our boardshorts, grabbed our cameras, and hopped off the boat into another world.

When Tre and I slipped into the water with our cameras, we were immediately surrounded. School bus-sized whale sharks cruised by at surprising speed and manta rays emerged from the deep blue and swooped around us. It was busy enough that concentrating on photographing was an easy way to get caught off guard by another huge shark that somehow materialized behind you silently and without you noticing. Sharks jostled for space with each other in a traffic jam of giants, dodging up and down to avoid collisions. That day, we estimated that there were close to a hundred sharks in the water along with a group of about 10 oceanic manta rays.

Tre and I bounced from shark to shark, finding incredible photographic opportunities as we went. A couple minutes into our drop, we heard our guide, Miguel, yell “Mantas!” across the water. An armada of five manta rays were steaming straight at us, stacked on top of each other like a staircase of giant black steps. After that incredible flyby, it was all we could do to not get barreled over by the many passing whale sharks.

One manta in particular swam for long stretches while upside down which was visible from the boat as a shining turquoise patch on the surface Underwater, it was even more impressive. The white was dazzling, and tricky to photograph at first.

On our final whale shark day, I spotted the first dorsal fin over Tre’s shoulder. Again, as soon as we saw one shark, we saw many. It was like an optical illusion that you couldn’t un-see once you figured it out. Of course, there were sharks here, how did we not see that before? I worked hard that last day to get all the shots I wanted, pushing past the soreness in my legs as I thought to myself that it was worth the pain. After all, when was the next time I’d be able to photograph anything as cool as this. A little pain wouldn’t get in the way of the sharks.

One of the last encounters I had was with a larger male shark that was bottle feeding – a behavior that the sharks only show when they feel very safe and comfortable. Bottle feeding is a vulnerable state where the shark is positioned vertically just below the surface of the water. The shark then sits in this position, gulping down water continuously, apparently having found a very high-density area of food that it is content with not moving away from. We circled the shark slowly, careful to not rush up to him, so as to not scare the shark out of its concentration on feeding. Even though there were fewer whale sharks on our last day, fewer was still somewhere between 20 and 50 sharks. It was incredible.

The experience of swimming with whale sharks in Isla Mujeres is something I’ll never forget, and I’m looking forward to more experiences like this that show how incredible ocean life is, though fragile.

All photos courtesy of Tre Packard and Tim Briggs 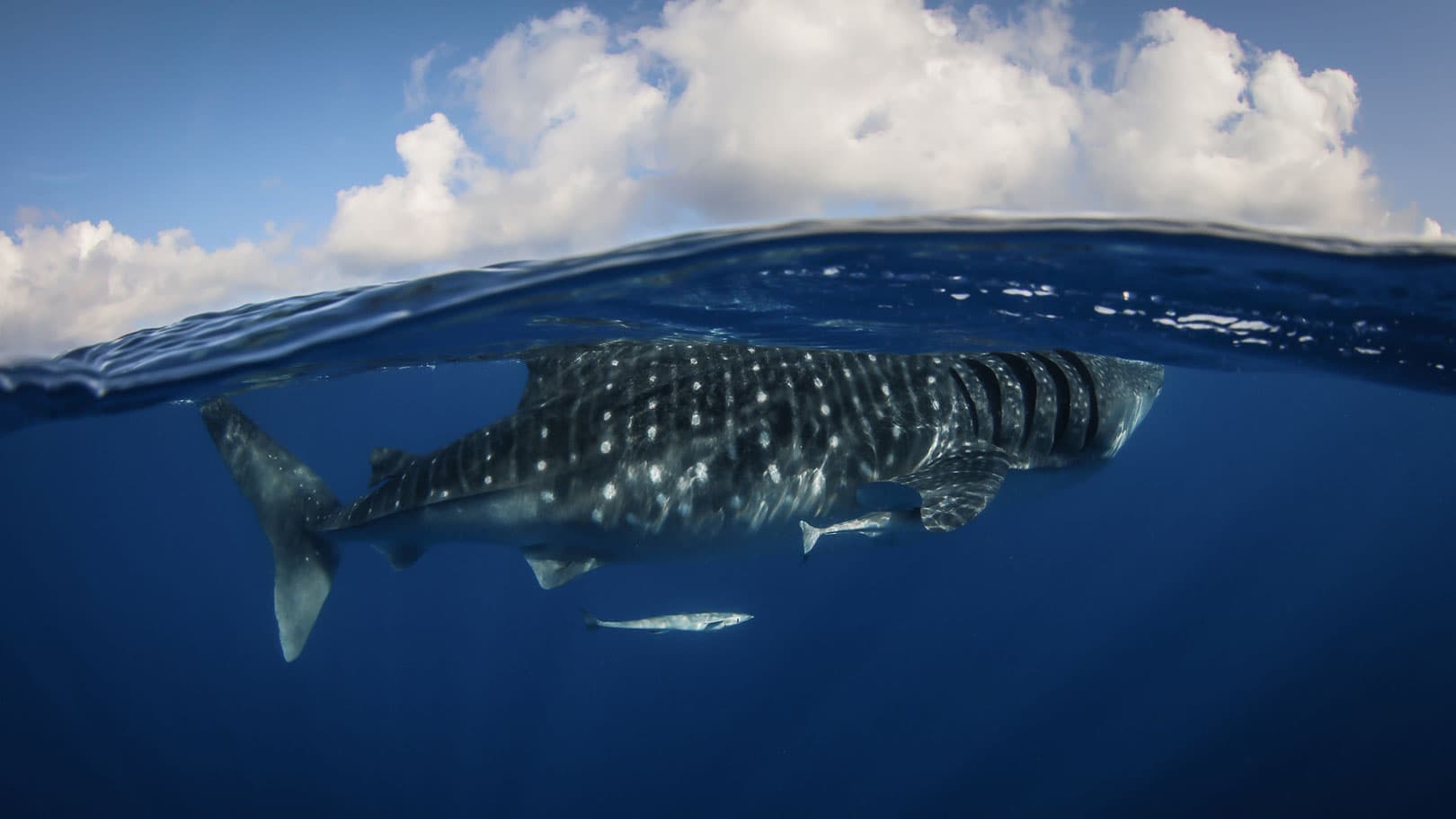 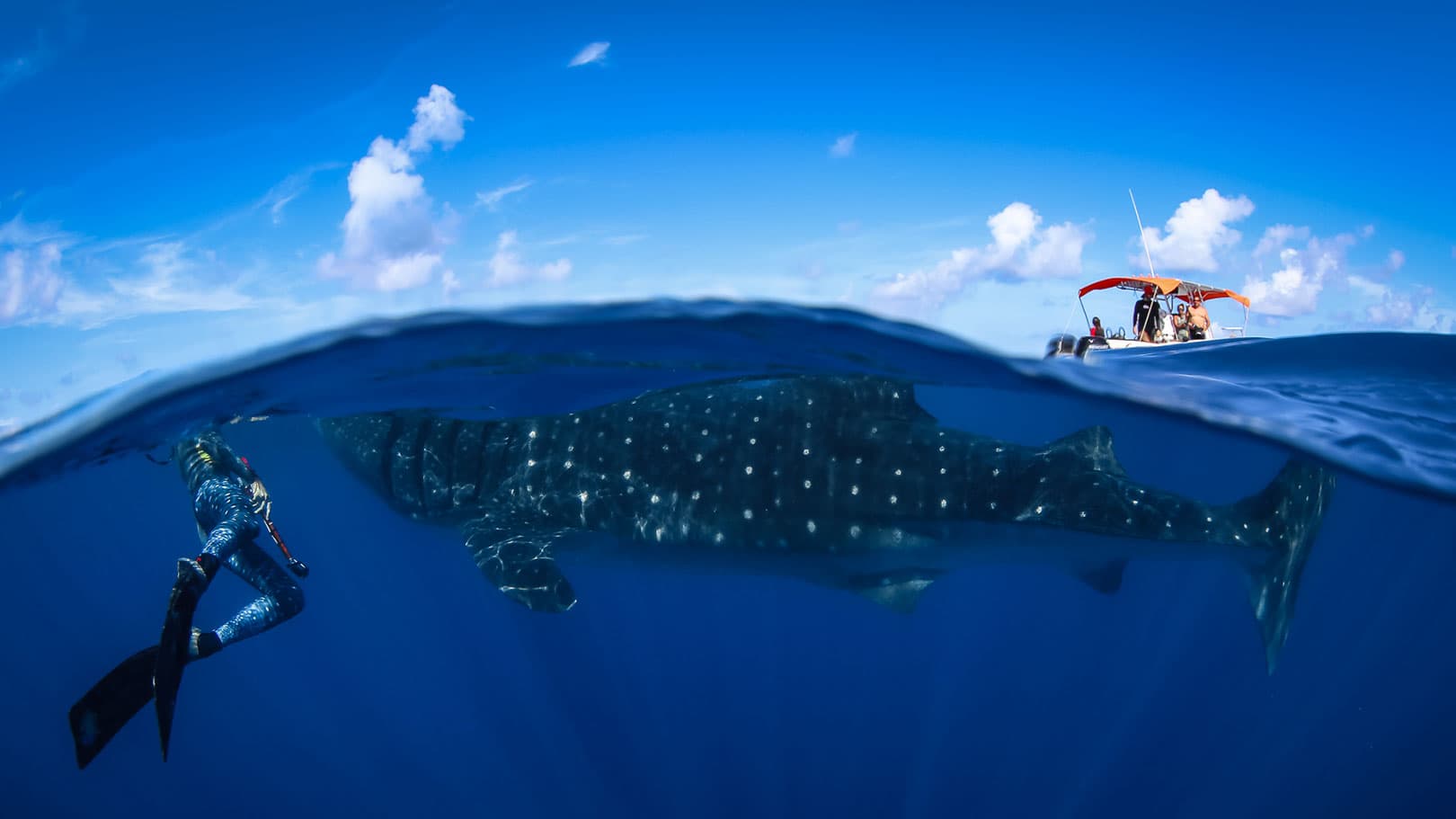 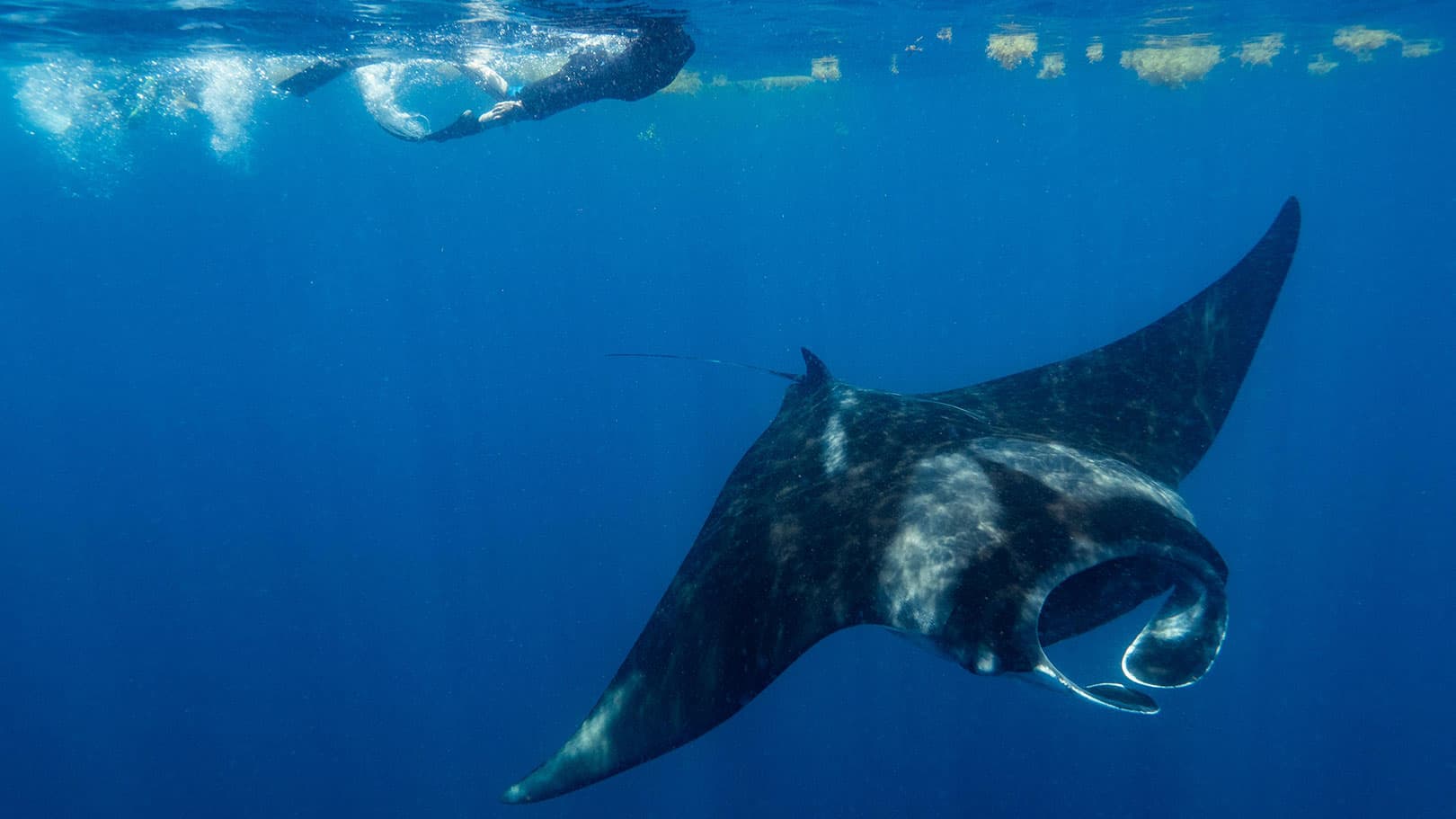 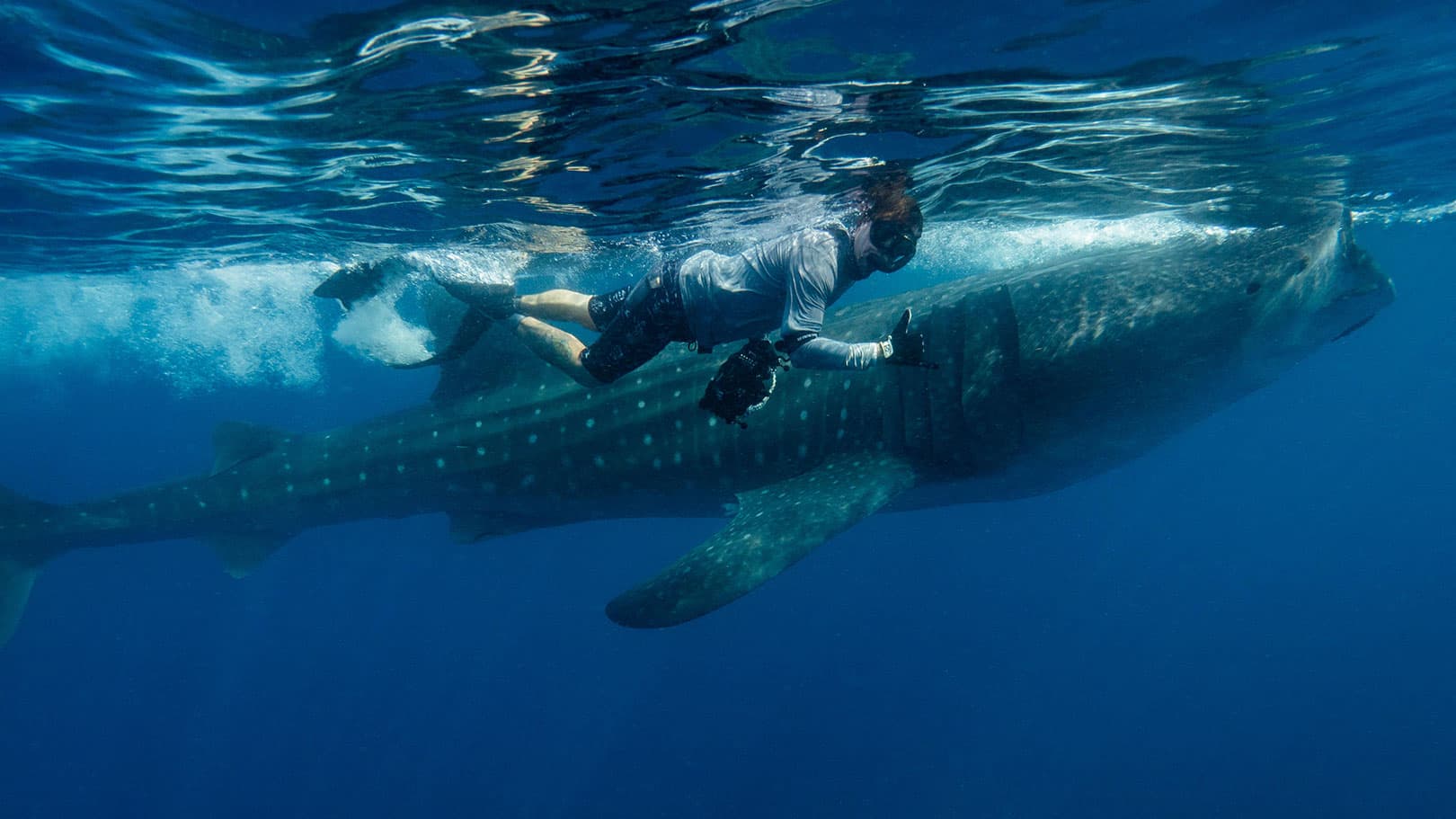 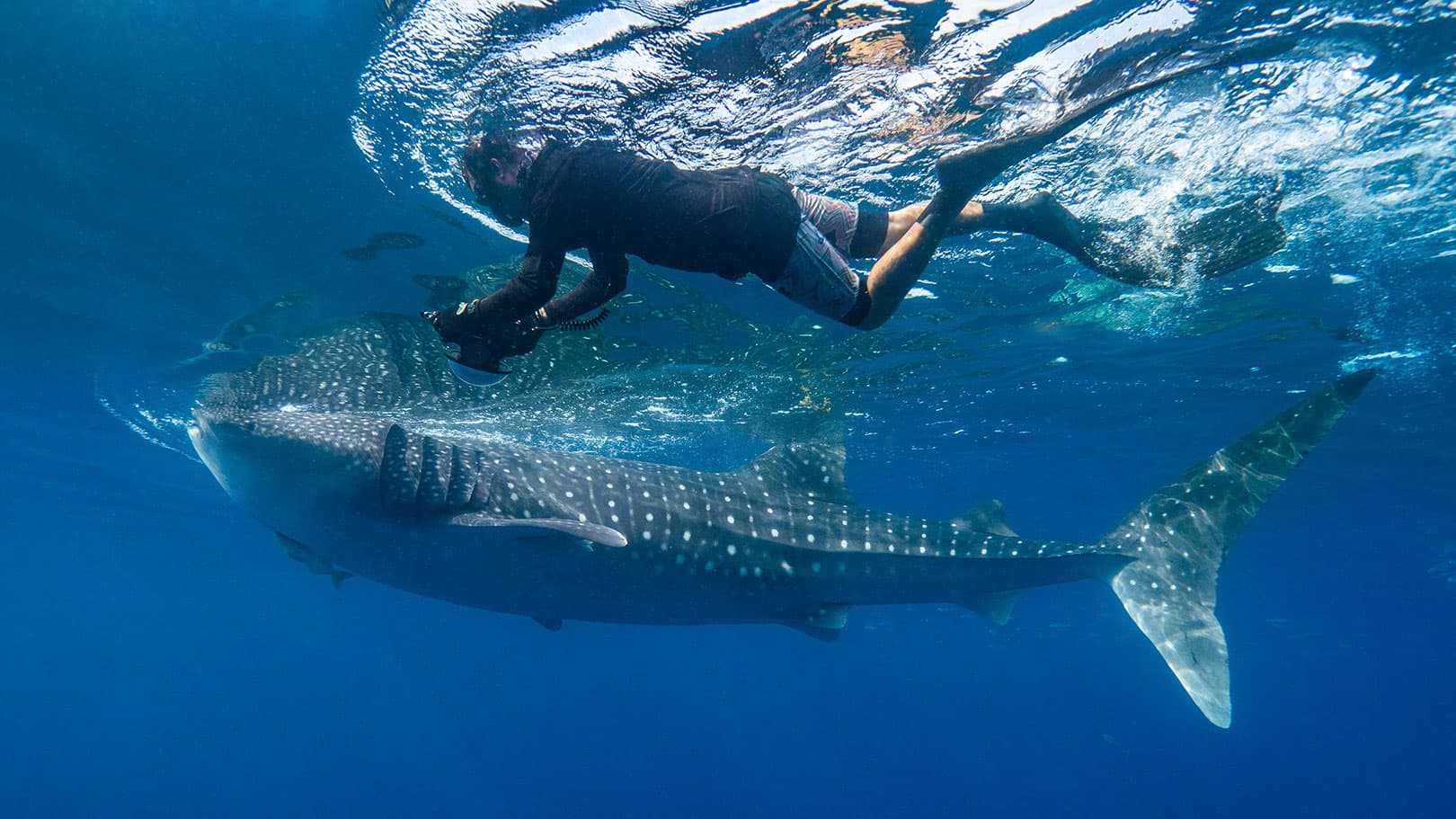 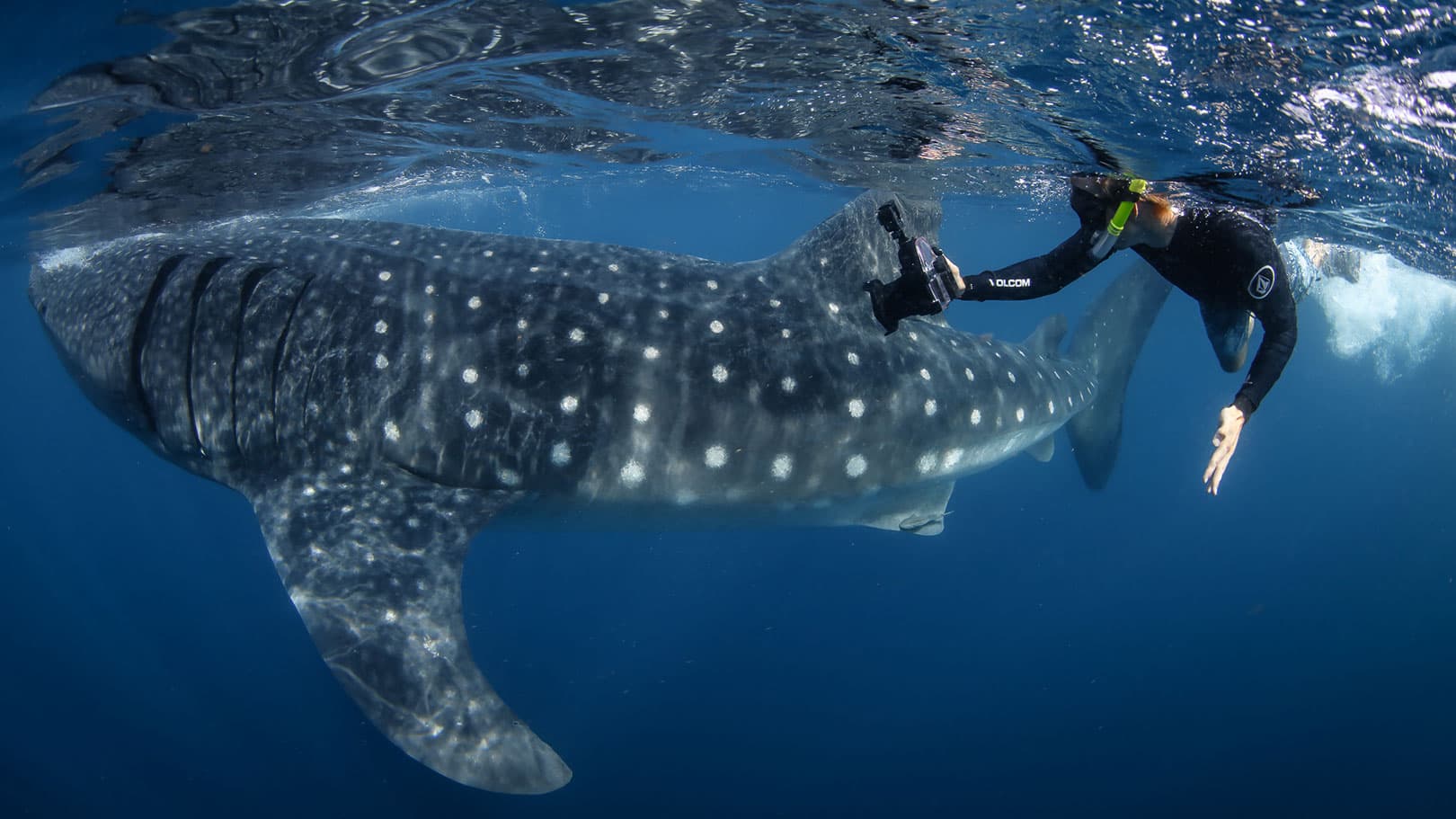 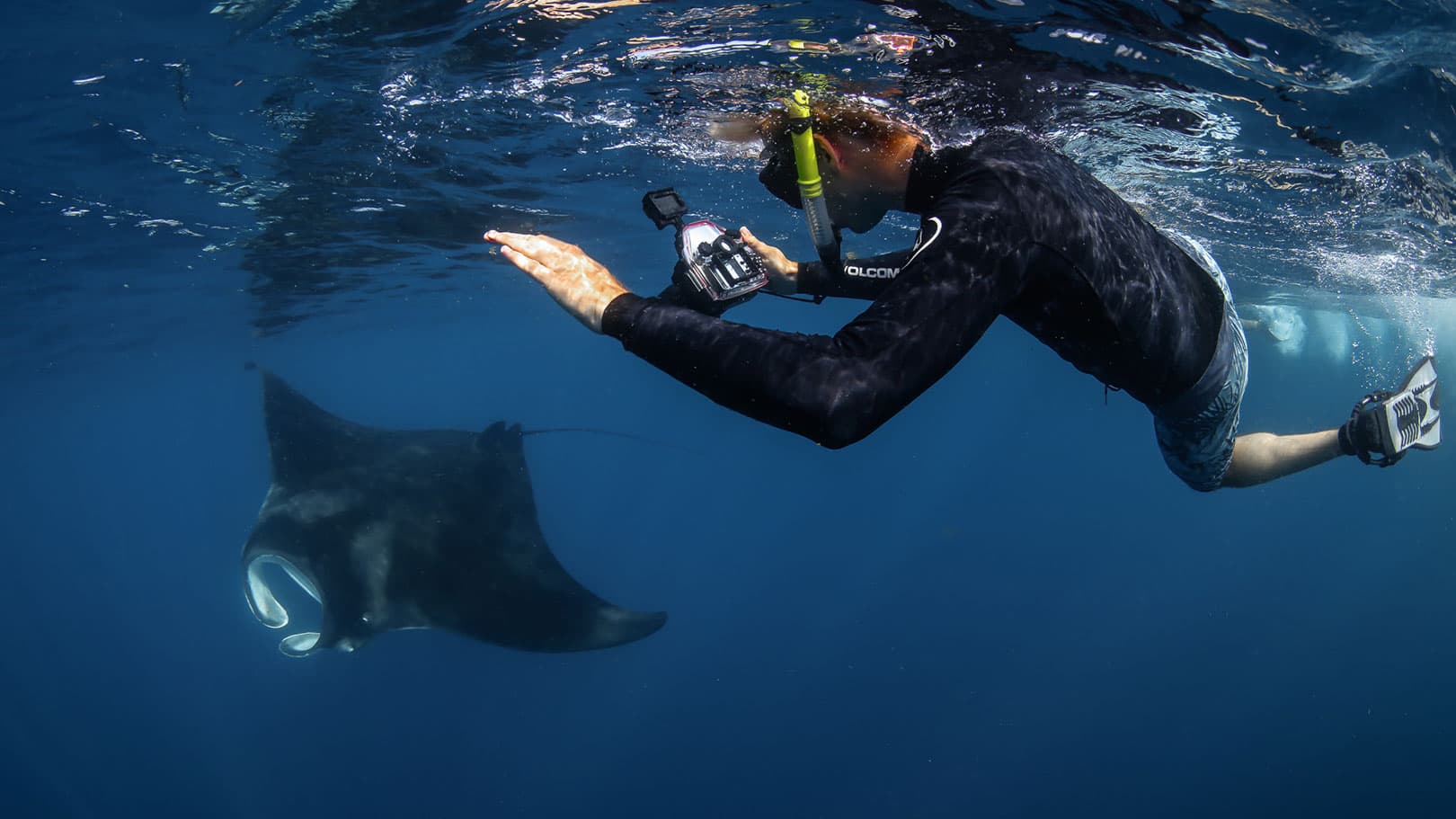 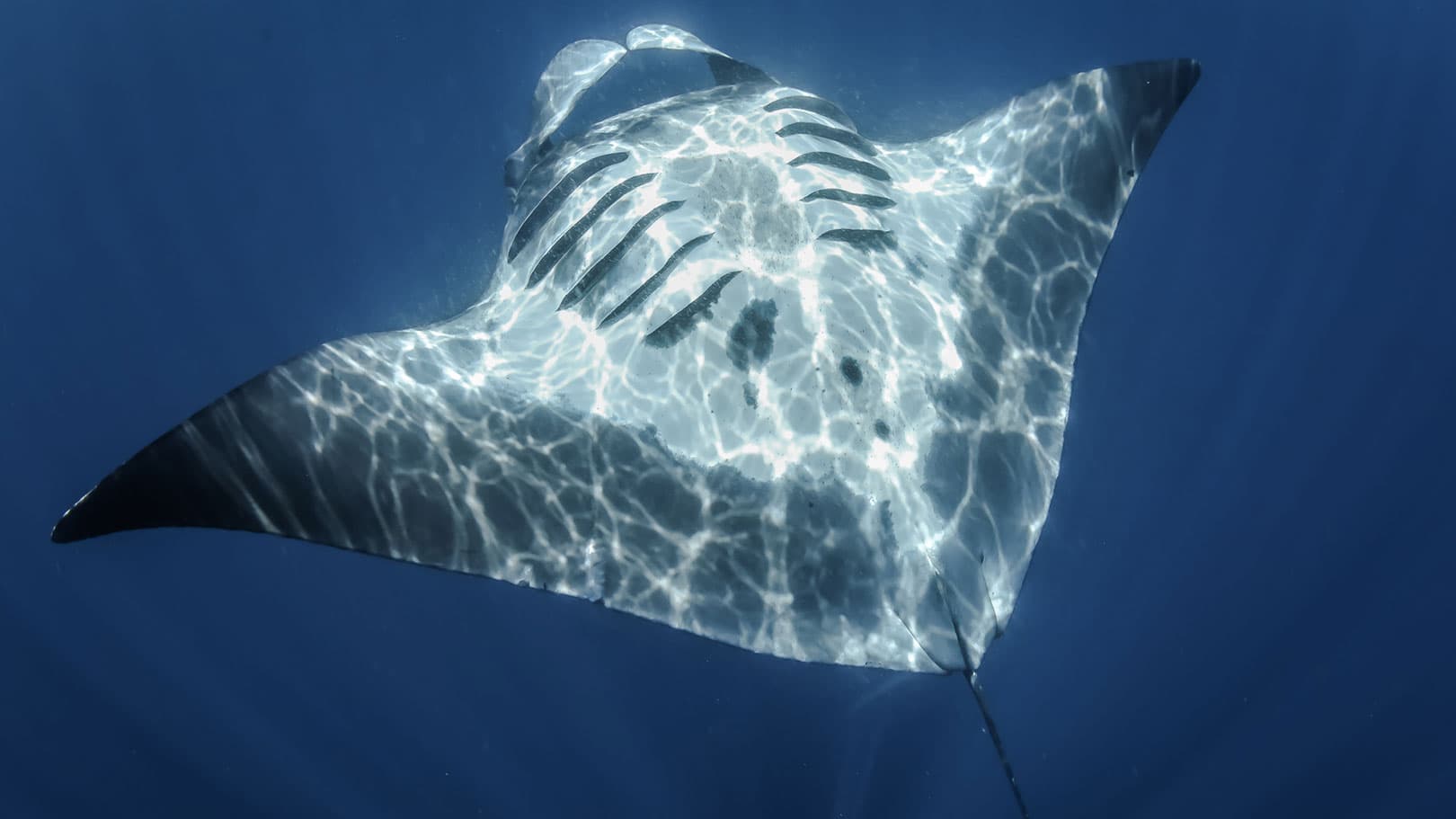 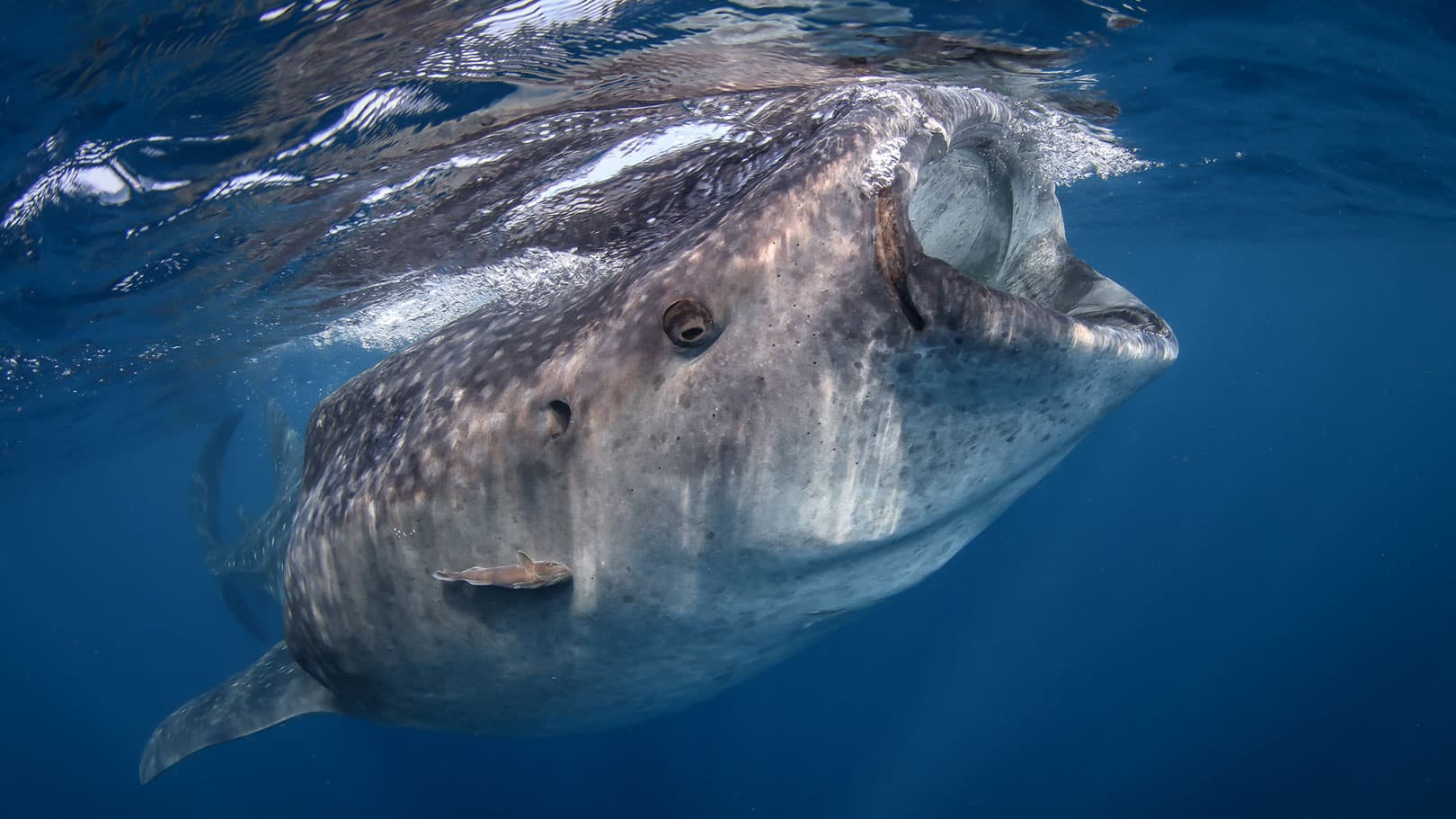 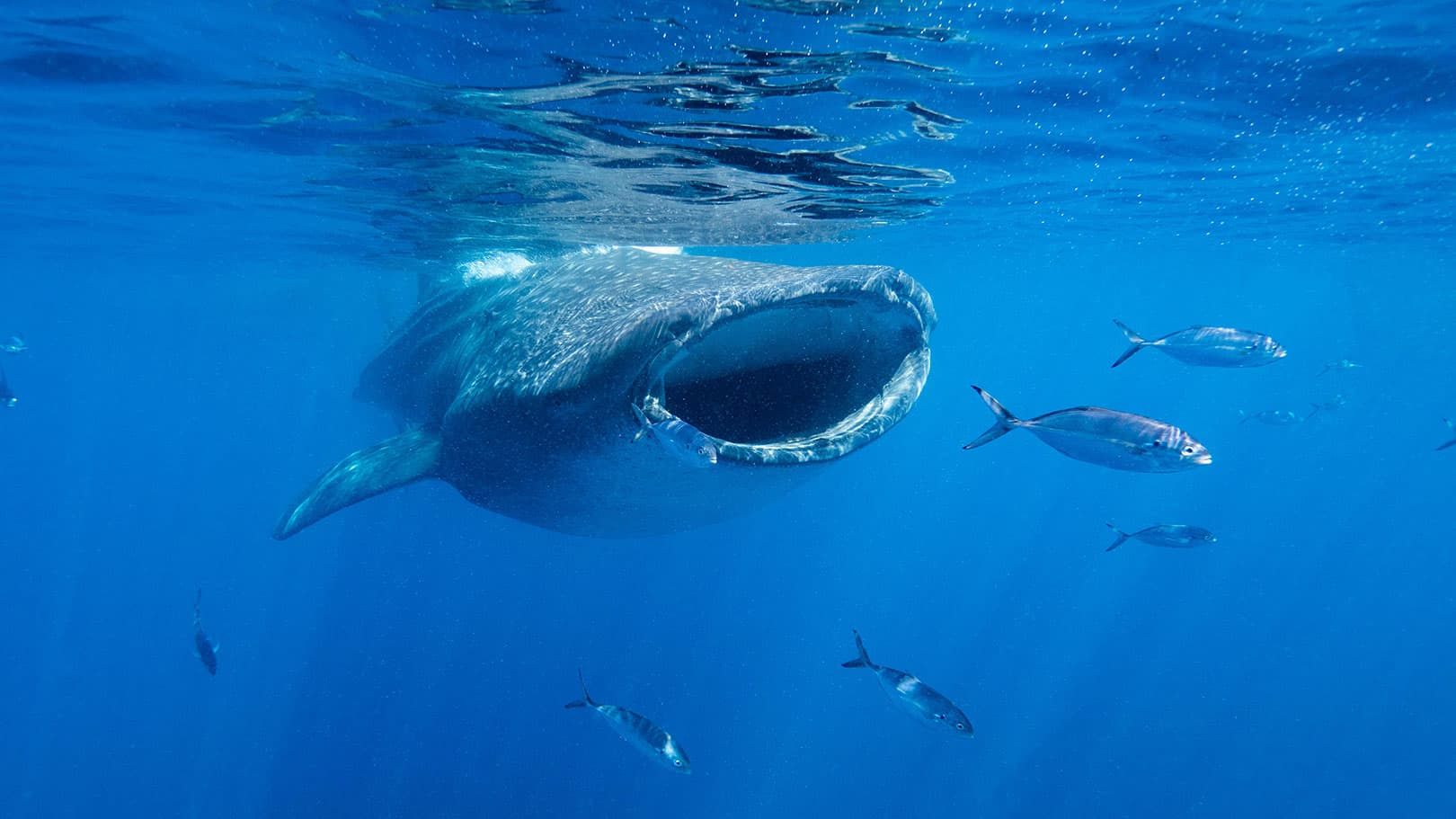 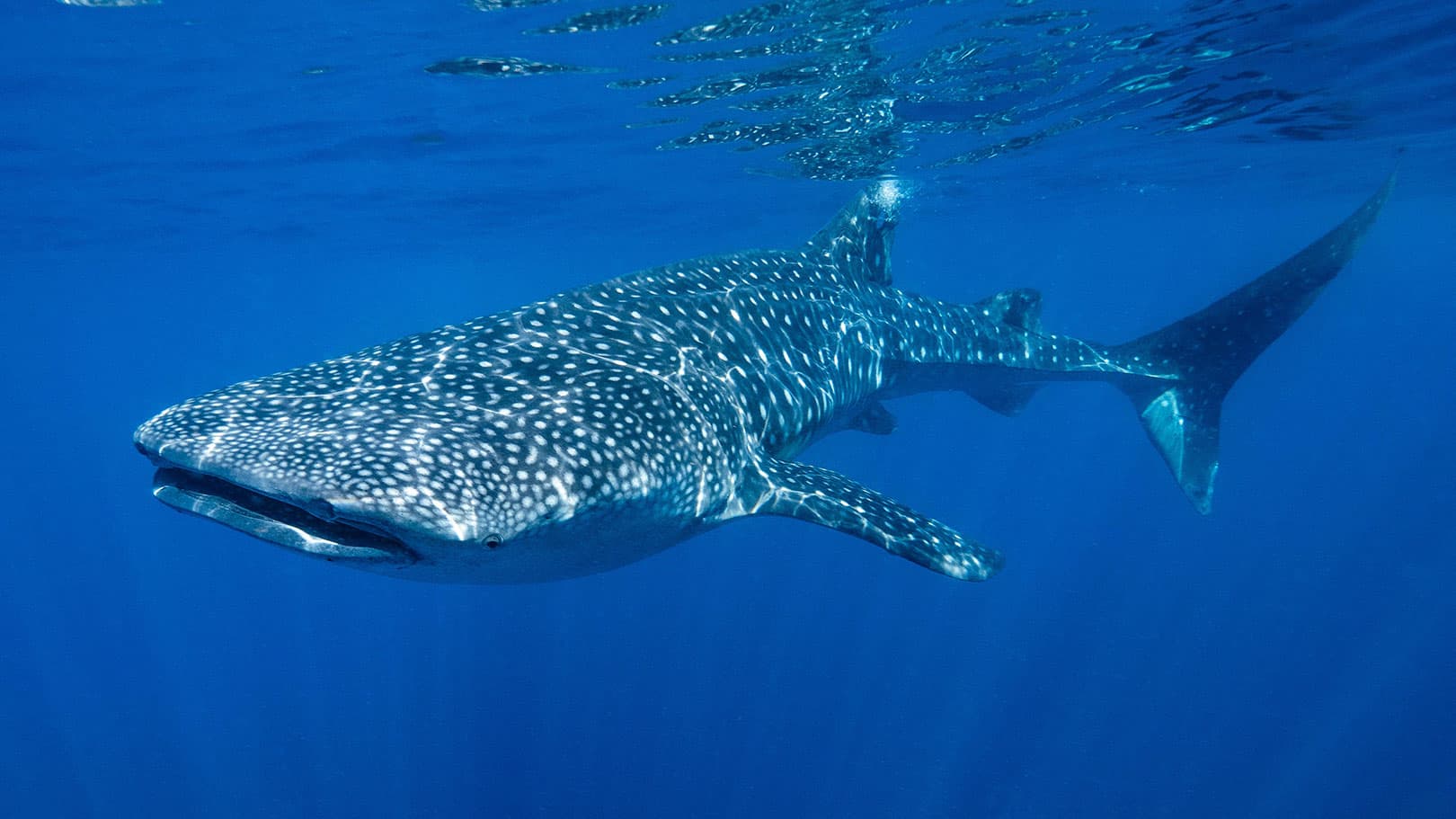